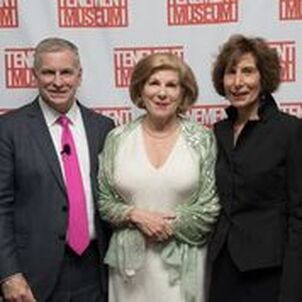 ON MAY 23RD THE TENEMENT MUSEUM  HAD  ITS GALA TO RAISE MONEY
TO CONTINUE WITH THIS LABOR OF LOVE PRESERVING THE IMMIGRANT HISTORY WHICH
IS VERY IMPORTANT FOR ANY AMERICAN ANYWHERE IN THE COUNTRY
THIS AMAZING MUSEUM IS DEDICATED TO SHOW TO THE CURRENT AND FUTURE GENERATIONS
HOW THIS COUNTRY WAS BUILT AND FROM WHO
IMMIGRATION HAD BEEN ATTACKED MANY TIMES IN USA HISTORY , HOWEVER, THE REALITY IS
WITHOUT IMMIGRANTS IT WOULD NOT BE AMERICA BECAUSE AMERICA WAS
RAISE BY IMMIGRANTS AND CONTINUE THAT WAY ACROSS THE COUNTRY
CONGRATULATIONS TO THOSE WHO ARE WORKING TIRELESS MAKING SURE THIS
GREAT ORGANIZATION STILL ALIVE AND WELL!!!
HONOREES:
HENRY LOUIS GATE JR.
University Professor, Filmmaker, Public Intellectual
Emmy Award-winning filmmaker, literary scholar, journalist, cultural critic, and institution builder, Professor
Gates has authored or co-authored twenty-four books and created twenty documentary films and Finding
Your Roots, his groundbreaking genealogy series now in its fifth season on PBS.
 Vartan Gregorian, President, Carnegie Corporation of New York
Vartan Gregorian is President of Carnegie Corporation of New York since 1997. The Corporation is a
philanthropic institution founded by Andrew Carnegie in 1911. In 2009, President Barack Obama appointed
him to serve on the President’s Commission on White House Fellowships.
 Stephen B. (Siegel, Founders Award recipient)* Chairman, Global Brokerage, CBRE
In his role at CBRE, Stephen Siegel advises major corporations and property owners on a broad range of
real estate strategies. Renowned for his philanthropy, Mr. Siegel has been called by The Wall Street Journal
“the most generous person in the industry.”
*First awarded in 2018 to the Museum’s Founder, Ruth Abram, the Founder’s Award recognizes an
individual whose personal contributions have been essential to the Museum’s success)